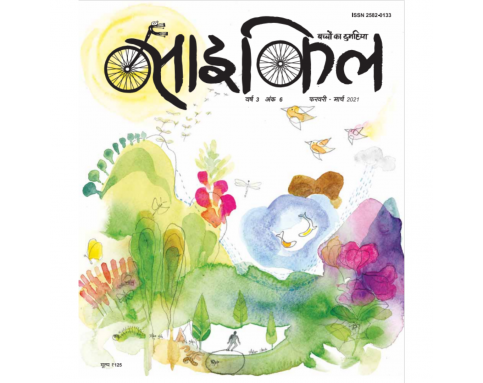 Cycle is a bi-monthly Hindi magazine for 9-12 year old children. With it a mundane everyday life becomes interesting, humorous and engaging. Through stories, poems, letters, travelogues and non-fiction articles on history, art, science, philosophy, it features the child’s world and his inquisitiveness. These writings accompany the beautiful hand drawn picture spreads.

Alsi Chor: Praful Roy writes a story about a thief who is so lazy that he decides to rest for a bit in a strangers house before looting it. Originally written in Bengali, the story is translated by Yayavar and illustrated by Atanu Roy.

Kelu ke Dost: Swetha Nambiar shares a story of Kelu’s friend, whom only Kelu can see. One night after a fight with Kelu, his friend leaves. Kelu looks and looks but…

Dear School: Eleven-year-old Awadharna writes a letter to her school during lockdown. It is illustrated by Taposhi Ghoshal.

Raja Bhayjeet ki Kahani: Udayan Vajpeyi tells us the story of the beginning of painting. This story journeyed for centuries, in the garb of Tibetan, German, and English, before returning to the language it was originally written in- Sanskrit. What a journey!